Xancil is a graphical package that is used to create Unfied Model ancillary files from netCDF files. Prior to using Xancil to create your files, you should ensure that the input netCDF files are on the correct grid (both horizontal and vertical) for the UM configuration that you are using.

Xancil is installed on ARCHER at

and on MONSooN (on the postproc03 machine) at 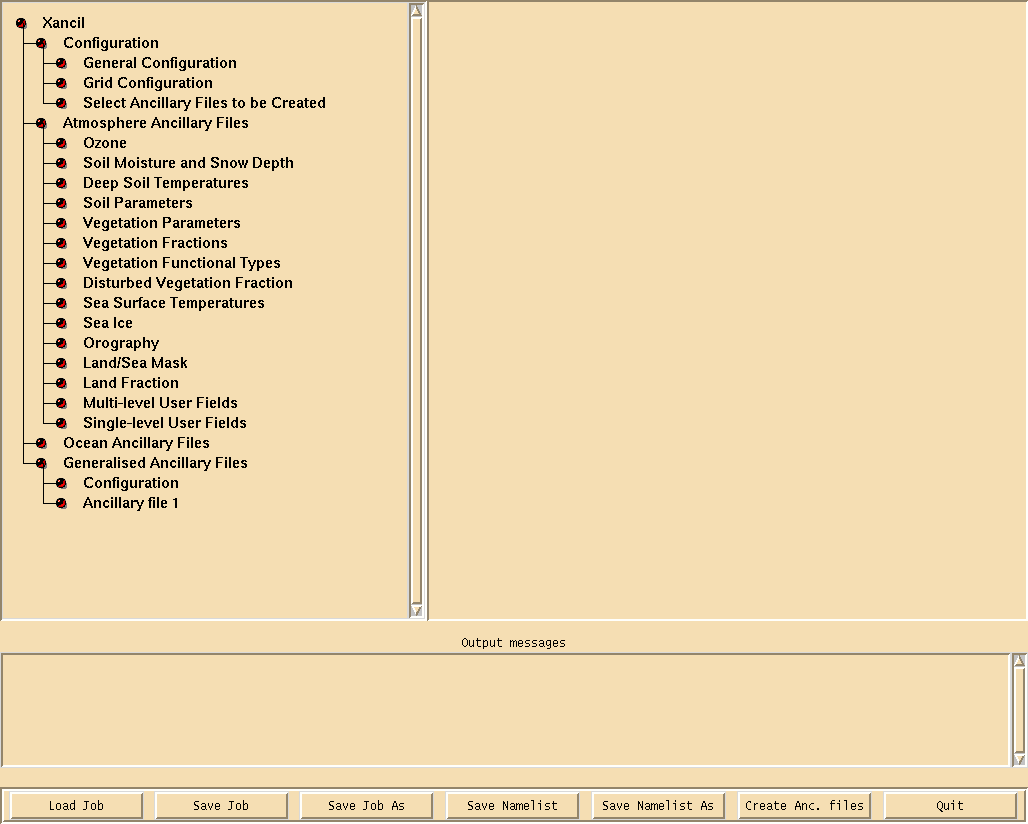 You may already have this location in your PATH and so can just launch Xancil from the command line by typing xancil. When you do this it will load up the Xancil window, which is initially rather empty. You should click on the Xancil text in the top-left corner. This will give 4 options:

Figure 1 shows the Xancil GUI with some of the menus open. You will probably not need to make up any ocean files, as HadGEM3 uses the NEMO ocean, but you will need to make use of the Atmosphere and Generalised Ancillary files when using UKCA.

In this panel you need to set the UM version number for the ancillary file you are creating (e.g. 8.4 etc). Failiure to do this will cause an error when running (as the default is UM4.5).

If you are using nudging you will need to change the calendar, and you may also want to output well-formed ancillary files.

On this panel you should tell Xancil which netCDF files it should read (which contain the data you want to make into ancillary files) and which corresponding STASHmaster files it should use that describe this data.

This panel is used to define the vertical grid being used, as well as being able to set the times used in the output ancillary files (although the time information can also be set in the individual ancillary file panels).

The vertical settings are only important for 3D ancillary files (e.g. UKCA aircraft emissions, which are on the theta grid), but in this case you will need use the specify atmosphere vertical levels, which takes the vertical level structure from the UM namelist that contains this information. The location of this namelist is specified in the UMUI in Model Selection → Atmosphere → Model Resolution and Domain → Vertical.

If you made up your input netCDF file using Xconv, and then you try to use the option which uses the name of the vertical levels from the netCDF file you may get the following error:

as Xconv does not output vertical levels which Xancil can read.

The ability to set the date and the number of times in the ancillary file is useful here, if needed.

This list gives the list of all the ancillary files that Xancil currently has defined settings for. We will not go through these in detail, but there are some options that you should be aware of.

You can use the Select button to choose the required field from the netCDF file. Usually Xancil will match up the name of the field in the file with the field code from the STASHmaster file, but if the name does not match (or matches a different field) then you will need to select this manually.

The Atmosphere Ancillary Files menu has only a sub-set of the number of ancillary files that you may wish to make up. If you want to make up a file that is not catered for you should use the Generalised Ancillary Files option.

This panel is useful for making UKCA initial conditions.

Using the buttons along the bottom of the GUI you can Save (or Save As) the current job you are working on or Load an existing .job file (as well as the namelists associated with the files). You should use the Create Anc. Files button to create the ancillary files when you are ready to do this.

Note: When you are using Xancil from scratch with your own STASHmaster file, Xancil will change the name in the Ancillary File panels (but not the file itself, when it is created) to that in your STASHmaster file. Another feature of Xancil is that often, when re-loading a saved .job file, the name of the fields defined in the user STASHmaster file has been lost, and instead it reverts to the name in the STASHmaster_A file. This does not affect the data in each field however.

When making the ancillary files, you will be given messages both to the Output messages window, and to the terminal.